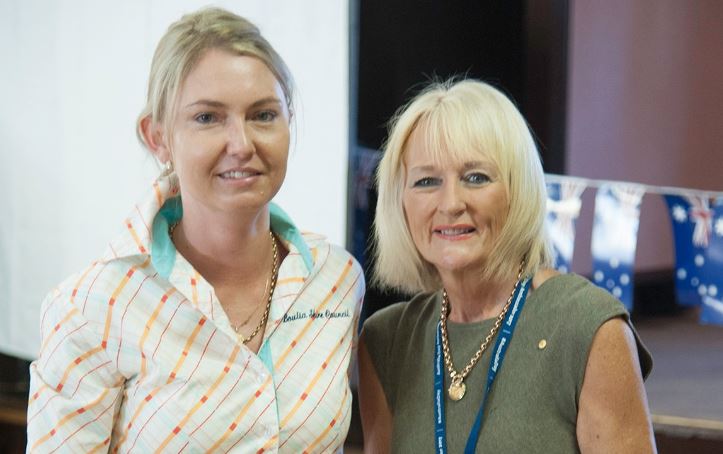 On 25 January Access CEO and Australia Day Ambassador Gail Ker OAM and BEMAC General Manager Leanne Tu’ipulotu set off from Brisbane airport for Mt Isa, their ultimate destination – Australia Day in Boulia. We asked Leanne to blog the trip so that we could share it with all of you! Read it here:

We touched down in Mt Isa and made our way to collect our hire car for the 303km drive southwest to Boulia. The area had experienced significant rainfall and the 40 degree plus heat we stepped into was engulfing. We travelled for just under 4 hours, marveling at the expansiveness of the landscape, the sheer size and age of it. After leaving Mt Isa the road initially traversed through rocky outcrops before entering flat and open plains covered in tussock grass.

Entering Boulia, the town appeared desolate, with not a soul in sight. But behind closed doors we discovered a hive of activity. Seeking respite from the sweltering heat, all the residents of the town it seemed were hiding out in air-conditioned interiors. We were treated to a delicious dinner with Mayor Rick Britton, CEO Lynn Moore and Boulia’s councilors at the pub before retiring to our room at the Desert Sands Motel for the evening. The sun rose on Australia Day and we went to the Australia Day breakfast in the local shire hall, where Gail delivered a speech and the Australia day awards were presented to a few of Boulia’s citizens. We conversed with locals over breakfast who told us stories of life in this remote town which is located along Australia’s Longest Shortcut. We met William, a local Pitta Pitta Aboriginal Elder, who told us many stories and also that if the clouds should start coming in at lunchtime we should start “go-go-going,” or risk getting stuck in town by flooded roads.

After the Australia Day event, we were taken on a Min Min Encounter. Boulia’s fame largely rests with its association with the mysterious Min Min Light, a strange spectral light that can appear, hover, disappear and reappear with an eerie will of its own. The Min Min Encounter was exceptional, and unlike anything I have ever experienced before. It is a unique theatrical experience incorporating animatronics, fibre optics and a whole host of other high tech wizardry. You walk through a house, wherein every room is a different set. In each of these rooms, you meet various life-size animatronic characters who all claim to have seen the mysterious light. The 45-minute Encounter is a tribute to the long honoured art of the bush yarn, and all the stories are based on real claims received by people throughout the years. We learned that a stockman made the first report of a Min Min Light sighting in the early 1900s, shortly after the Min Min Hotel was destroyed by fire. In rapid succession came two more reports to substantiate the stockman’s story of a strange glow right in the middle of the cemetery that got bigger and bigger before moving toward him. Many more sightings of the Min Min Light has followed since the initial few, starting the legend of the mysterious lights, which have never been solved.

Leaving the Encounter I was truly in awe at the innovative and creative means by which this tiny remote town has preserved its history, and reminded of the powerful role art plays in the conservation and transmission of heritage and culture. A visit to the Marine Reptile Fossil Display next, would deepen my wonderment at this outback town full of surprises. Housing the fossilised remains of giant marine reptiles that date back more than 100 million years, as well as many other fossils that lived in the inland sea upon which Boulia stands, the ancientness of this land we call home really sunk in, in a way that I have never experienced. Our tour of the Stonehouse was also wonderful. Built in 1888, it houses a wealth of Boulia Shire’s history within its walls.

Shorty after 1PM the clouds started rolling in. Heeding William’s advice, we bid farewell to the warm and welcoming community that had been our hosts and set back off down the “Min Min Byway” to Mt Isa, with an eye on the horizon for the mysterious Min Min Light.